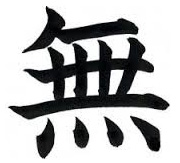 Yes and no, Yin and Yang, do or don’t – language is structured and limited.

Wouldn’t it be nice if there was one word that meant, ‘Your question is based on a assumed view of reality so it’s impossible to give a proper answer’?

There is – in Japanese at least – and it is ‘Mu’.
If I knew that in ninth grade, class would have sounded more like a day at the farm.
Actually ‘Mu’ has many meanings. It sometimes means ‘No’, or ‘No thing’,
or ‘Unask the question’.
Here it means ‘No’ in the sense of ‘Your question is inadequate to the situation – Find a better question.’

There is a Zen story of the eighth century Zen Master, Joshu.
A monk pointed to a mangy, scrawny dog and asked him,
‘Does this dog have Buddha nature?’
Something of a trick question, as on one hand everything has Buddha nature, on the other hand to admit it was in the dog would seem to cheapen it.
Joshu replied ‘Mu’.
Both ‘yes’ or ‘no’ would have been wrong.

Everyone likes simple answers, but life is neither simple nor straightforward,
so life tends to give us plenty of ‘Mu answers.
A Mu answer demands a better question.

Which is very confusing for the cat, waiting (or not) for someone to open the box.
Is the cat alive?  ‘Mu’. (Or should that be ‘Miaow’?)
Is the cat dead? ‘Mu’.
Does the cat have Buddha nature? Mu.

Our knowledge and our happiness and our answers all depend on the quality of our questions.
‘Mu’ reminds us of that.
Let’s always find the best question we can rather than strive for answers.

The Mu newsletter is short – but satisfying.
It ranges over all the coaching topics – Physical, mental and spiritual, always looking for a better question.
You will also get links to interesting events, music and books.

Past blogs and newsletters

The last Lambent Letter was about practice and what it can make you. Better than you were, no doubt, but not perfect. How much better depends on the quality of the practice. It reminds me of a story that I used to tell my guitar students. It is probably true, or if...

END_OF_DOCUMENT_TOKEN_TO_BE_REPLACED

When I began as a classical guitar concert player and teacher, I used to tell my students 'Practice makes perfect', so often that their eyes glazed over. It's a cliché, so no one paid any attention to it. They 'knew' it was true, practised when they felt like it,...

END_OF_DOCUMENT_TOKEN_TO_BE_REPLACED

What does 'Ozymandias' mean to you? You may know it as the title of the 60th episode of the great TV series 'Breaking Bad', called by many one of the greatest TV drama episodes ever made. It had action, drama, pathos, emotion, the tangled webs of each character came...

END_OF_DOCUMENT_TOKEN_TO_BE_REPLACED

I wrote in the last Lambent Letter about the old Irish custom of setting a place at the dinner table for the 'unexpected guest'. It is a metaphor for hospitality and also for letting the unexpected into our lives. Today I would like to develop that theme, because it...

END_OF_DOCUMENT_TOKEN_TO_BE_REPLACED

Happy New Year to all our readers! My apologies for the unpredictable arrival of the Lambent Letter before Christmas, this was due to a lot of travel and time zone hopping. Christmas and new year were a holiday, and a very enjoyable one. And….as it is new year, how...

END_OF_DOCUMENT_TOKEN_TO_BE_REPLACED

What game are you playing?

The ICC virtual summit - 'Coaching For Peace'  is running now and I gave the first session a few days ago talking about a coach as an internal peacemaker when the client is fighting themselves. I like the idea of the coach as peacemaker, many clients are at war with...

END_OF_DOCUMENT_TOKEN_TO_BE_REPLACED

Reality – what a concept

Welcome back! September is here, the holidays are over (for most of us), and there is a chill in the air - Autumn has crept up, while we were not looking and its cold breath is already starting to make misty and frosty mornings in our local park. A big difference from...

END_OF_DOCUMENT_TOKEN_TO_BE_REPLACED

Fat? No weight – it’s all about goals

END_OF_DOCUMENT_TOKEN_TO_BE_REPLACED

Oh Brazil! When you read this there will be a new World cup holder (Germany) and the memory of Brazil's disastrous defeat by Germany in the World cup will have faded somewhat - it could be a painful memory or a happy memory depending on which team you support. Germany...